Come in and meet the team!

In the office every Tuesday and Thursday

[This article is an extract from MetroNorth newsletter.]

Artist David Newman-White has submitted a painting of Uncle Harold Hunt to the Archibald Prize this year. The exhibition features portraits of people who are distinguished in areas like art, literature, science or politics.

Uncle Harold is from the Maliangaapa tribal group of The Corner Country of NSW which ran from Tibooburra to the Flinders Ranges in the South and East to the Paroo river. He has been a client of Wangary Home Care for 6 years.

Will be CLOSED
Monday 26th March
and
Tuesday 27th March

We apologise for any inconvenience

A significant storm event brought down three power poles and associated conductor on the high voltage network on Saturday afternoon. The incident occurred near where the main line crosses the Menindee/Wilcannia road at Moorabin.

The small but violent storm tore branches from trees and dumped a lot of rain in a short time over the area. It was reported by Paul Woodbury, who lives at Moorabin, that the rain was coming in horizontal. The only significant structural damage there was the old shearers toilet which was blown 100 metres across the paddock and a number of trees blown over.

Several groups were on the river when the storm hit. One person said that looking down the river it was just a wall of white coming towards them and the sky was orange with lightening. Being on the water in a metal boat was not the ideal place to be. Fortunately there was not much hail in the storm.

The NSW State Emergency Services and Barrier Local  Area Command have announced that effective from Friday the 17th February, the Darling River is closed to all motorised craft between Texas Downs Station and Weir 32 at Menindee.

Exemptions do exist for residents who are affected by flooding and require the river to access their respective homes. They are proceed at a low speed so to not create a wake. This closer has been put in place to safeguard newly constructed levy banks to protect homes and livelihood.

At this point there are only 2 residents in Menindee who require this (this is likely to change over the coming weeks). Police, emergency services and state water are also exempt.

The NSW State Emergency Service continues supporting communities in the far west of the state to manage extensive rural flooding. Floodwaters moving down from Queensland and the upper Barwon River are impacting several major river systems and communities across the region are being urged to prepare for the effects.

Approximately 250 Goodooga residents remain isolated as they wait for the Birrie and Bokhara Rivers to recede. Both rivers peaked on Sunday 19 February 2012 slightly lower than expected, with the Birrie at 5.17m and the Bokhara at 4.28m. The NSW SES is working with the community to maintain supplies and protect lives and property.

Opening hours are 10am to 4pm weekdays

tocked and sorted used book collection has also been arranged.

The IRSD funded Wilcannia River Radio website is live and running. Fantastic local resource and promotion of a positive and much loved local MPREC initiative! 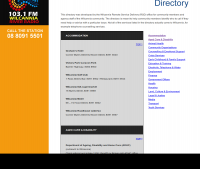 The RSD Wilcannia Community Service Directory is featured on the website and the local community events page updated by the Wilcannia RSDC office.