At the meeting of Central Darling Shire Council in Ivanhoe today, two reports were considered regarding the future of the old Post Office building in Wilcannia and the purchase of the existing Licensed Post Office business from the current licensee.

The reports were adopted so the Council will now purchase the business and relocate it to the Old Wilcannia Post Office building. Council will also be investigating the possibility for the opening of a Tourist Information Centre in the same building.

Clr. Ray Longfellow, Mayor of Central Darling Shire, said he was delighted that Council had resolved to operate the Post Office and return it back to the building from which it had historically operated.

“It has been approximately 15 years since the Post Office business was removed from the original Post Office building. We are pleased to see the business returning to the old building, which had served as Wilcannia’s Post Office for over 120 years.”

Tourists often ask about what appear to be the ski jumps located at set intervals across the Talyawalka flood plain on the Cobar side of town. Former resident and Telstra employee Peter Clark who worked on the installation of the cable, gave us the following information. In the 1970’s the American space exploration program was in full swing.

Satellites launched by National Aeronautics and Space Administration (NASA) were having trouble communicating with each other and earth based stations due to the curvature of the earth. To overcome this they built an earth station at Moree NSW and another at Ceduna, South Australia. Telecom, as Telstra was known then, installed the links between the two stations. It was also used for international and local traffic, though its most important and prime function was for NASA. The link between Cobar and MacDonalds Hill, near Olary, S.A. is a co-axial cable. The project cost $35 million in 1975 dollars ($221,685,000 in todays $).

Please be advised that routine maintenance works are scheduled to be completed on the historic Kinchega Woolshed.

Kinchega NP Field Staff will be performing maintenance on the Woolshed interior by applying a lanolin based decking solution in order to help protect the timbers from weathering and keep the Woolshed’s wonderful sheep smell alive.

While the lanolin is being applied and drying the Woolshed will be inaccessible for public safety reasons. Works will commence on Monday 26th August 2013 and are expected to take a week to complete.

Nominations close for Co-Op Board

Community Dinner at the community hall.

The Bill O’Reilly oval in White Cliffs on Sunday the 1st of September at 2.00pm

A light lunch (pies pasties, etc) at around 1pm.

The sporting club will have the bar open from after midday. Teams decided on the day

The Golf Club’s Green Dragon Chinese restaurant has become well known for the quality of Richards cooking. Richard is now a household name on the south coast following a live phone interview with Wollongong’s Wave FM on Saturday afternoon. Wave FM recently ran a competition offering, as the prize, a weekend trip to the outback for 4 listeners and their partners. The tour was organised by Guidepost Tours. 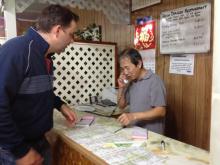 Guidepost Tours organised a similar trial run tour last year, which also included Wilcannia and lunch at the Green Dragon restaurant as one of the tour features. This was how word got to Wollongong about Richard and his meals. Morning show presenter Travis Winks, who accompanied the tour, said he had heard from the previous tour group, and in particular Paul the pilot, about Richard and was keen to get him on air to talk about the challenges of producing high quality meals in a remote town. Travis arranged for the station to phone Richard while the group was enjoying lunch. The interview and photos can be found on www.wavefm.com.au. Follow the links to “Outback Adventure”.

Or leave a message via the form below: