After 3 ½ years of repair and restoration the Courthouse Café opened a door for business last week.  Located on the corner of Reid and Cleaton Sts the site contains two historic buildings.  The first is the original Inn, built around the 1870’s from Wilcannia sandstone, containing in those days 5 bedrooms and two large reception rooms.   Today there are 2 bedrooms and four other rooms, all with timber ceilings - some original - from the 19th century.  Most floors are concrete with one timber, now replaced with new cypress pine. 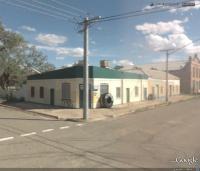 The second building (at left), built in the early 20th century of local brick, is known to locals as the Courthouse hotel, previously the Punt hotel.  It was considered the best pub in town for at least the last 30 years of it’s life as a licensed premises which ended in 1990 when the then owner sold the license to a Sydney developer for a new building for the Olympic Games in 2000 for a rumored $110,000.   Originally the pub had three bars with a dining room, pool room and cellar.  Two walls were removed at some unknown time resulting in the present configuration of a large open space with fireplace and two rooms off it.  This is now a café with old style furniture, palms,  lamps and decorations including various bits collected by Sarah and Adrian in previous lives in Melbourne, UK, Sydney, Jakarta and Canberra.

Both buildings have been lovingly repaired by at least a dozen local workers plus some from elsewhere for the new owners Sarah and Adrian Fethers.  This includes a renovated kitchen with the capacity to provide meals at all times for large groups or individuals as required.  Last week the café opened for the first time selling Coffex coffee, biscuits, soup, bread, sandwiches and cake.  The goal is to offer locally grown and prepared food to tourists and Wilcannia residents, and to sell locally produced art and woodwork .

Anyone who would like to work either in the kitchen or café is invited to call in for a chat with Sarah and Adrian.