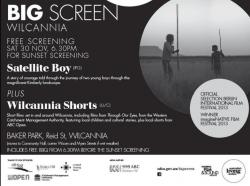 Special guest Aaron Pedersen will be in Broken Hill this November, to introduce his latest film, western-style thriller Mystery Road, which opens the outback tour of the National Film and Sound Archive’s annual Big Screen Film Festival this year.

Big Screen will tour the NSW outback towns of Menindee, Broken Hill and Wilcannia, from November 28 to December 1, with brand new films, classics from the NFSA’S collection and some fun special events over the 4 days.

The Festival begins in Menindee on Thursday 28 November, with a FREE outdoor screening of Satellite Boy, a heart-warming story starring screen icon David Gulpilil, with food and entertainment before a sunset screening.

An exciting Opening Night in Broken Hill on Friday 29 November kicks off at the Broken Hill Regional Art Gallery, with Opening
Night Drinks in a combined event of art and film, then continues around the corner at the Silver City Cinema with opening night
film Mystery Road, followed by a Q&A with guest star Aaron Pedersen.

Come and be pampered on Saturday 30 November at the Goddess Beauty Bar, included in the ticket price, before the screening of stylish Australian musical comedy Goddess, starring Magda Szubanski and Ronan Keating. Saturday afternoon is all about cars and stars, when Eric Bana’s film Love the Beast charges onto the big screen, with a special line-up of cars from Broken Hill Vintage and Veteran Car Club as part of the fun.

Sunday 1 December includes family-friendly film Return to Nim’s Island, starring Bindi Irwin and a community fundraiser screening of Satellite Boy with proceeds to aid Red Cross, in the afternoon. Over the weekend, a special showcase of films about Broken Hill and
surrounds will play at the Broken Hill Art Regional Art Gallery. Silver City Classics features the work of legendary photographer and director Frank Hurley and early local newsreel footage. Also on exhibition will be film stills by Ivan Sen, featuring the stellar cast from Mystery Road, as well as new art gallery exhibitions.

Big Screen hosts a free outdoor screening and BBQ in Wilcannia on Saturday 30 November with Satellite Boy plus local shorts about Wilcannia, from ABC Open and the Through Our Eyes project.

Big Screen Film Festival is an initiative of the NFSA to bring new and archival films to audiences across regional and rural Australia, including new films, plus ones from the on-going collection.

Where: Broken Hill, Menindee and Wilcannia – event and screening details at
www.nfsa.gov.au/bigscreen/broken-hill-menindee-wilcannia/

Thursday 28 November, from 6.30pm for a free sunset screening

Bring the family along for a special outdoor screening of new Australian feature Satellite Boy, featuring David Gulpilil and newcomers Cameron Wallaby and Joseph Pedley, in this heart-warming story of a young boy’s mission to save his home. The film was shot in the magnificent Kimberley region in WA. “Catriona McKenzie's Satellite Boy radiates respect for traditional folkways and the Aborigines who
manage to maintain them.” John De Fore, The Hollywood Reporter.